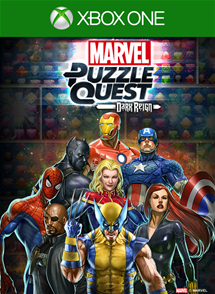 Full-disclosure: I had a major addiction to the original Puzzle Quest: Challenge of the Warlords when it hit the Xbox 360 back in 2007. I probably lost a good two months of my life to scouring the whole map, reaching the maximum level with my warrior and beating every last enemy, plus the Revenge of the Plague Lord DLC. But for as much as I loved that game, the follow-ups, Puzzle Quest 2 and Puzzle Quest Galactrix just never got their hooks into me quite the same way.

Now comes the latest Puzzle Quest game, this one full of Marvel Comics awesomeness. And while this is my favorite Puzzle Quest game since the original (possibly because I’ve always been a huge Marvel fan), it still falls short of topping Challenge of the Warlords as the best game in the series.

Marvel Puzzle Quest is built on the addictive match-three gameplay found in the Bejeweled series and its many clones that have been released over the years. Where the Puzzle Quest series differs is that every time you make a match, you’re doing damage to your opponent’s hit points, like in an RPG. After your move, it’s your opponent’s turn to deal damage you. Once you’ve built up enough gems of a certain color, you can then unload a special attack for bigger damage or some other special attack. This might mean unleashing Iron Man’s repulsor ray for hundreds of points of damage, or removing all the green gems on the board, which can do even more damage if used strategically. Marvel Puzzle Quest also lets you collect white gems for even more powerful team-up attacks, which are moves you collect from downed enemies.

While past Puzzle Quest games have involved a series of one-on-one fights, in Marvel Puzzle Quest, you pick a team of three famous Marvel heroes before each match to take on 1-3 baddies. While the Marvel Universe remains divided on the big screen thanks to movie rights split between Disney and Fox, in this game, all your favorite characters are here from Spider-Man and Captain America to Wolverine and Mr. Fantastic. There are even a couple more obscure choices like Devil Dinosaur and Spider-Gwen thrown in for good measure.

While picking a team of three characters adds more strategy to the game, it can also make leveling up your characters much more of a chore, as only heroes put into play gain experience. That means that if you suddenly want to change course and add Spider-Man to your roster after not including him on your team several matches, you better put him with two extremely powerful characters or he’s going to get crushed. Equally frustrating is how new powers seem to appear randomly. Most characters start the game with just one special power. I was mostly playing through the story mode with Iron Man and Captain America, yet kept unlocking powers for Doc Ock… who I hadn’t used once. This makes getting through the game and leveling up your characters quite frustrating.

And speaking of frustrating, the infamous Puzzle Quest AI is present again in this game, although it’s quite toned down from some of its predecessors. You won’t be completely beaten down on the first move like could sometimes happen in Challenge of the Warlords, but it’s not uncommon to think you’re doing well when suddenly an enemy makes a move that drains 700 hit points and ends the round. That’s when I would take a break and play something else for awhile. Still, for all of its issues, Marvel Puzzle Quest is addicting enough that I would always come back for more. 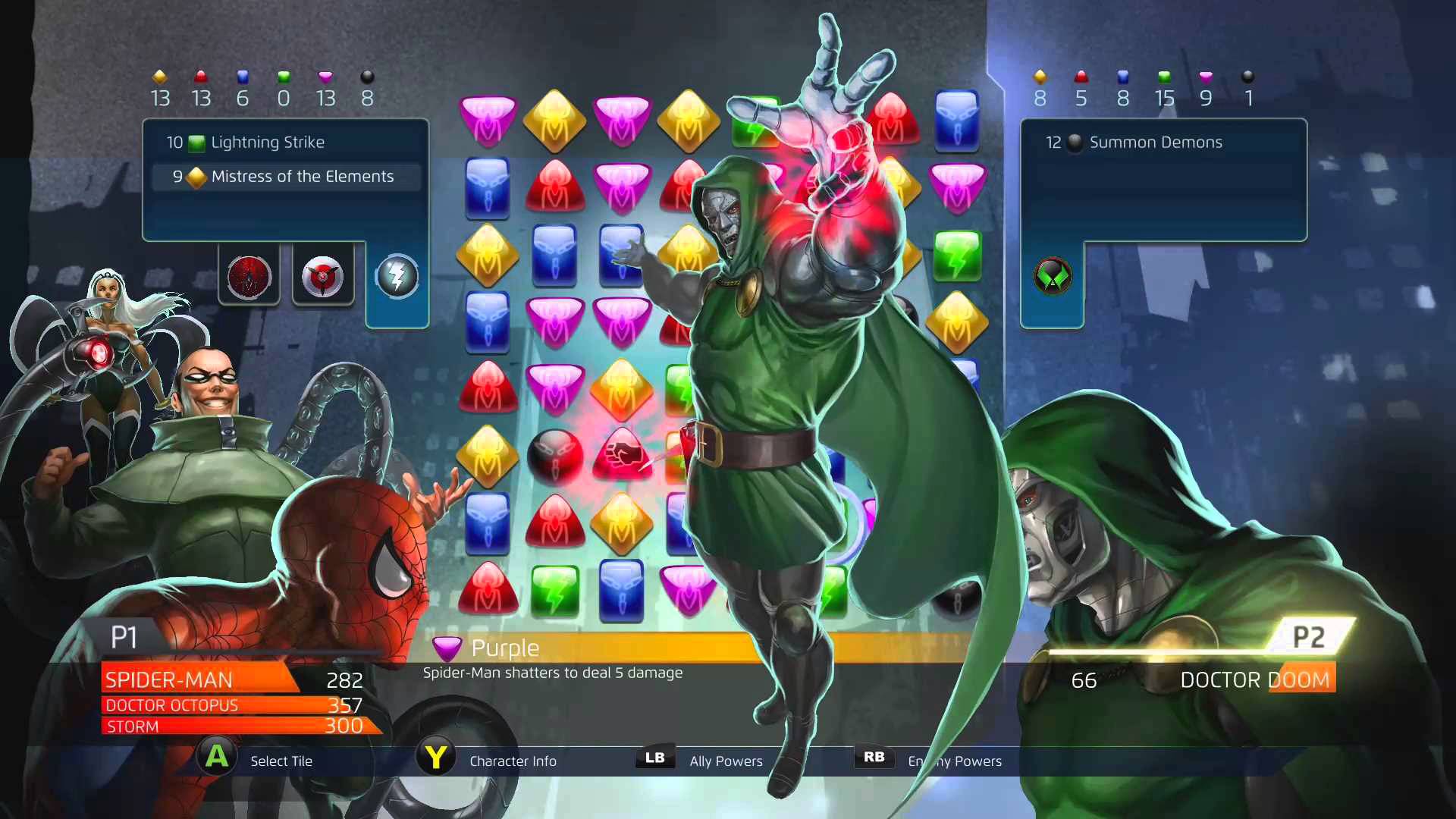 It’s difficult to judge the graphics of a puzzle game. Technically, this is one of the simplest looking games on Xbox One. The original Xbox could have handled this game with no problem back in 2001. The layout of the boards is clear, and the art is done very well. You won’t mistake characters for someone they’re not, although the overuse of random “thug” and “weapons analyst” enemies does get annoying. That the art on the gems changes slightly depending on the characters you pick is a nice a touch, and the effects that pop up when you land a special move are fitting, even if the animation is often little more than a drawing of a character appearing on-screen with a sound effect. Ultimately though, a game like Marvel Puzzle Quest rises or falls based on its gameplay, not its graphics, and in this case the graphics are really just a nice accompaniment to a solid match-three foundation. 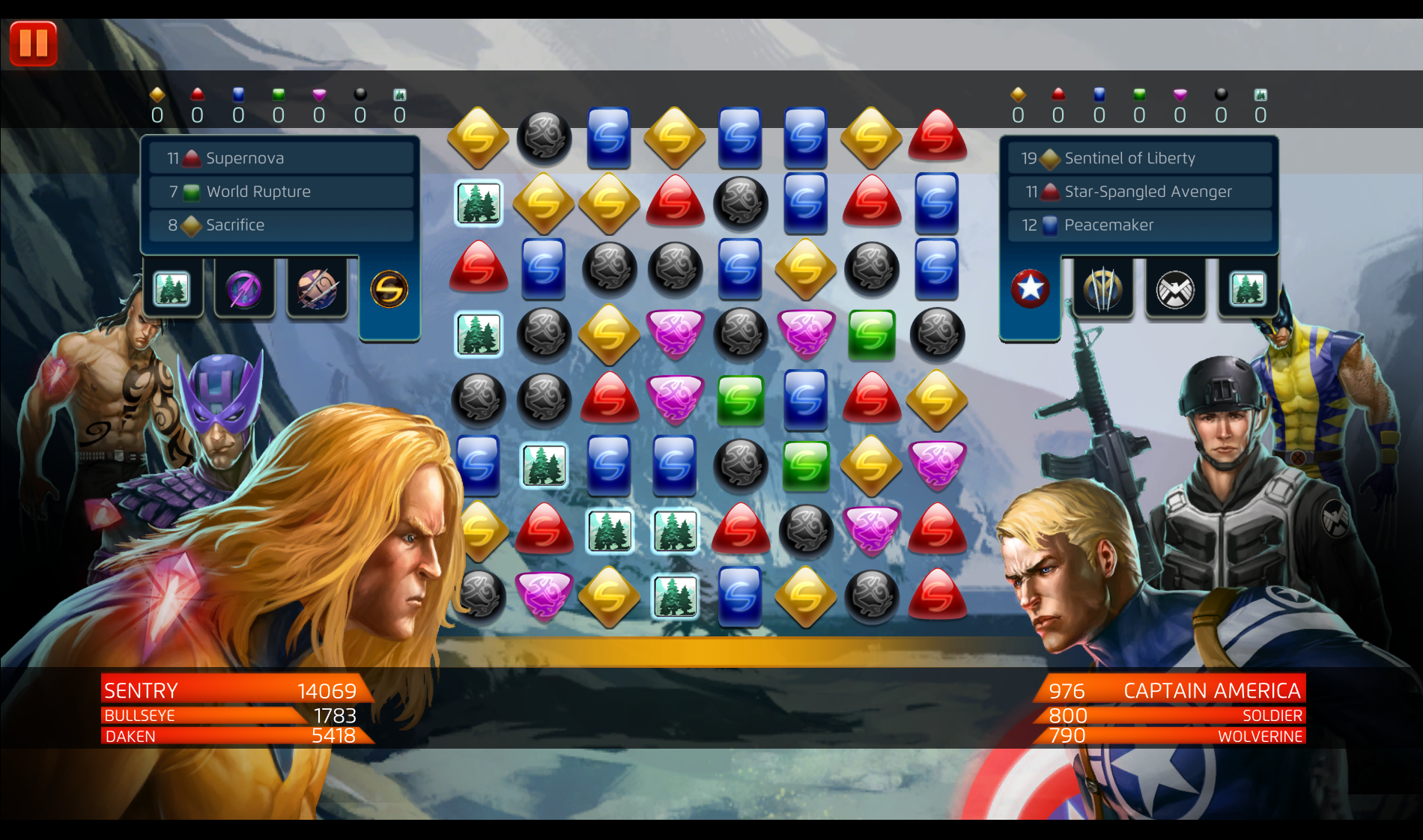 There are only a handful of musical tracks, that all try to sound like epic hero music. I say they “try” to sound like that because more often than not these tracks sound like they belong in a bad reality TV show. These songs sound more like what plays to add drama before someone is about to be kicked off the island than what should be playing in the background during an epic confrontation between Thor and The Juggernaut. Sound effects for special moves, like Wolverine’s claws or The Punisher’s Molotov cocktail come across much better and actually do make these puzzle battles feel like exciting superhero brawls. The writing in-between games is actually pretty good, so it’s disappointing that D3 Publisher didn’t spring for any voice acting. It makes the game feel like it belongs on smartphones (where it originated). 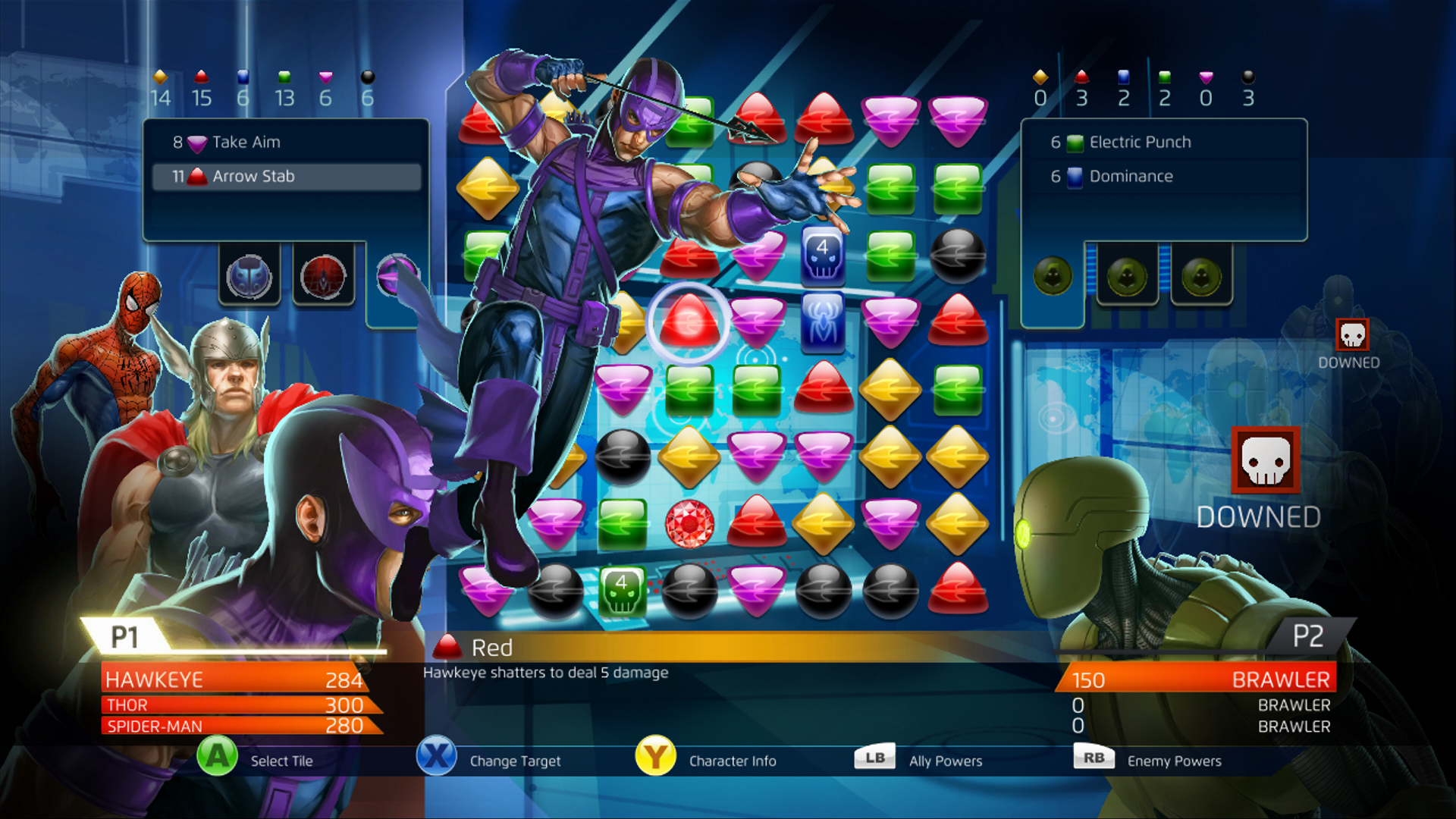 The five chapters are each made up of dozens of levels, plus the Xbox One version comes with Deadpool and Hulk chapters that are paid DLC on other platforms. Combine that with the 60 playable characters that you can level up, and online multiplayer, and you have a game that can last you dozens of hours if you can avoid the frustration that often comes with Puzzle Quest games.

The match-three gameplay is solid, but an often-times difficult progression system and AI that borders on the psychic makes Marvel Puzzle Quest a frustrating game to play for long periods. Still, there's fun to be had here in short bursts. 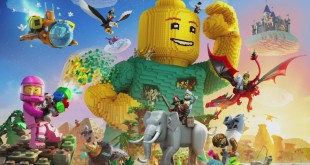 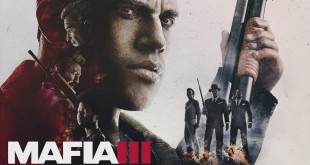