When I first played PlatinumGames’ Bayonetta back in 2009, my first thought was definitely not that someone needed to make a version of this game with Transformers in it. But apparently I lacked the vision of the good people at Activision and PlatinumGames who saw an opportunity and went for it. Transformers: Devastation is a super slick-looking version of Bayonetta with giant robots taking the places of a half-naked witch and evil angels. But it’s also a little bit easier and more accessible than Bayonetta, which are changes that end up hurting it in the long-run. 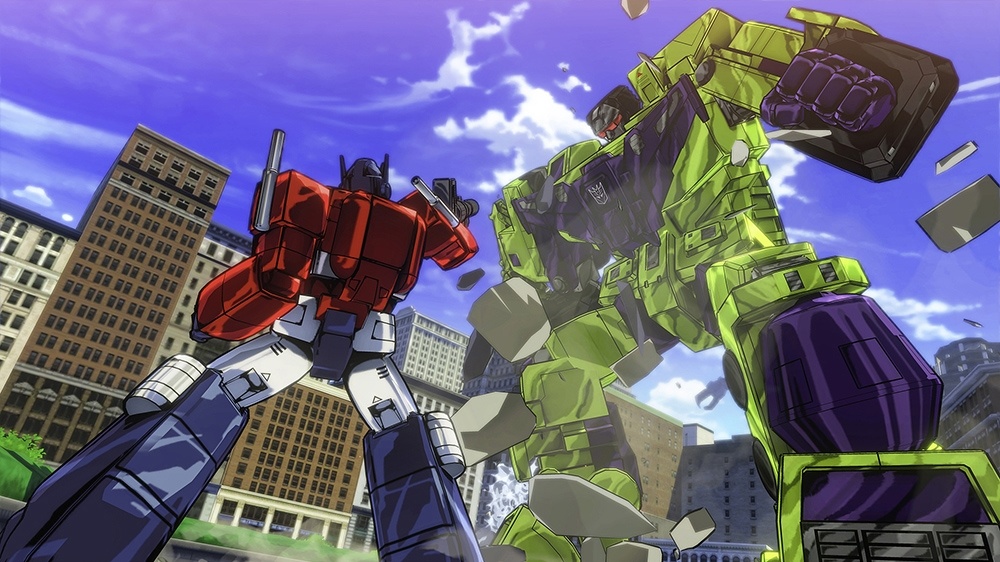 The gameplay of Transformers: Devastation will be instantly familiar to anyone who has put some time into Bayonetta. Press X for normal attacks and Y for strong attacks. The right bumper dodges, and if you press it at just the right time, you slow down time to rack up even larger combos. Get your energy meter high enough, and you can trigger a screen-clearing super attack by pressing both analog sticks in. Devastation is so true to Bayonetta, that it even breaks its seven chapters into multiple missions. You get a grade for how quickly you take out enemies in each mission just like in… you guessed it, Bayonetta. If Transfomers: Devastation wasn’t made by PlatinumGames, it would be one of the most blatant and boring copies of another video game in history, but given the PlatinumGames has only released two Bayonetta games to date (and the second one is a Wii U exclusive), it’s somewhat welcome to see a game that so closely mimics the series’ combat on Xbox One, even if the combat isn’t anywhere as deep as Bayonetta’s.

There are of course some differences between Devastation and Bayonetta, and it goes beyond the giant cel-shaded robots running around the levels. Combat emphasizes transforming into your vehicle form in the middle of melee combos to increase damage. This is a fun addition to combat, but it just doesn’t develop enough over time. Once you have it down, that’s it. You just hit the button at the right time for your transforming attack every few seconds.You can’t rack up multiple transformations in a row for huge damage, which would have been an interesting addition, and the timing never really changes.

Bayonetta also put much more of an emphasis on gameplay. In Devastation, you have access to guns and missile launchers, but they’re rarely useful in combat except for taking out the occasional sniper, and one rather annoying boss later in the game. You can of course transform into a vehicle at any time, and these forms are limited to projectile weapons as well, but I always felt underpowered as a vehicle. Driving around in Optimus Prime’s truck form was really only ever useful to set up more powerful melee combos. Focusing more on melee combat does help separate Devastation from the popular Cybertron games of the past few years, but it’s not exactly true to the source material, and the melee combat isn’t quite varied enough to stand on its own.

Rounding out the gameplay is a system of combining melee weapons and guns to create ever more powerful tools of destruction. Systems like this can be a lot of fun, but even after playing through the campaign and making dozens of new weapons, I have no idea how the synthesis system in Devastation really works. Combining two seemingly powerful weapons usually creates surprisingly underpowered new ones. At one point I created a Level 5 rocket launcher with a stunning zero damage output. Why the game would even allow this to be created is beyond me. Some sort of basic logic or a brief tutorial would have gone a long way toward making this system understandable.

But, hey, it’s Transformers, it’s not meant to be understandable (just try making sense of the movies). Transformers has always been a series about giant robots beating the hell out of each other because of… reasons. And that’s exactly what Devastation is about. The Autobots have to stop the Decepticons to save the world for reasons that are really only clear in the Transformers universe, and it’s a beautiful thing to watch these robots that look ripped straight out of the ’80s cartoon go at it. Transformers: Devastation isn’t going to keep you occupied for weeks and months to come, but it’s a fun ride while it lasts. 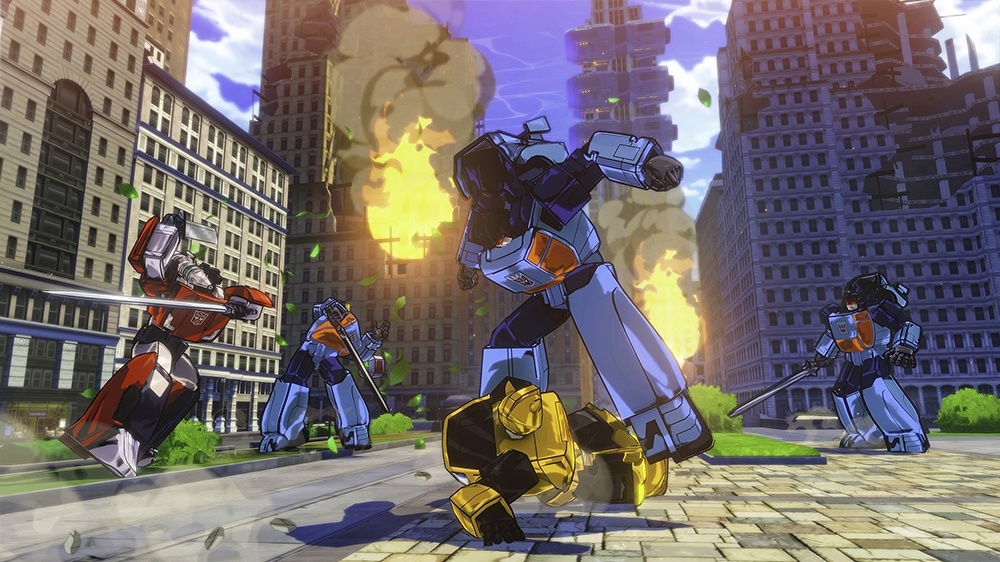 On the one hand, it’s easy to knock Transformers: Devastation for looking plain. Streets and buildings tend to be flat and lack detail. But then again, this is exactly what the old-school Transformers cartoon looked like, and those of us who grew up in the ’80s remember that cartoon far more fondly than Michael Bay’s take on the franchise. It’s taken a long time, but thanks to the power of the Xbox One, we finally have games that look exactly like the cartoons of old. And actually, when you get to the neon-filled Cyberton levels, the game looks even better than the old cartoons. The only real graphical problem is that sometimes the camera doesn’t follow the action very well, particularly when you’re in vehicle form and trying to shoot a bunch of enemies or set up a melee attack.

There’s a lot of generic rock music as you battle through the levels of Transformers: Devastation. It fits the action well, and actually it’s right in line with the Transformers franchise, but it’s not stuff that you’re going to be humming along with later, like with some of the tunes in PlatinumGames’ own Bayonetta. And none of it is nearly as good as Stan Bush’s “The Touch” from The Transformers: The Movie. But the real highlight here is the voice acting. PlatinumGames managed to reunite most of the cast from the original Transformers cartoon, and they haven’t missed a beat in the last three decades. All of the cast slides back into their old roles easily, making this feel like a playable episode of the cartoon. 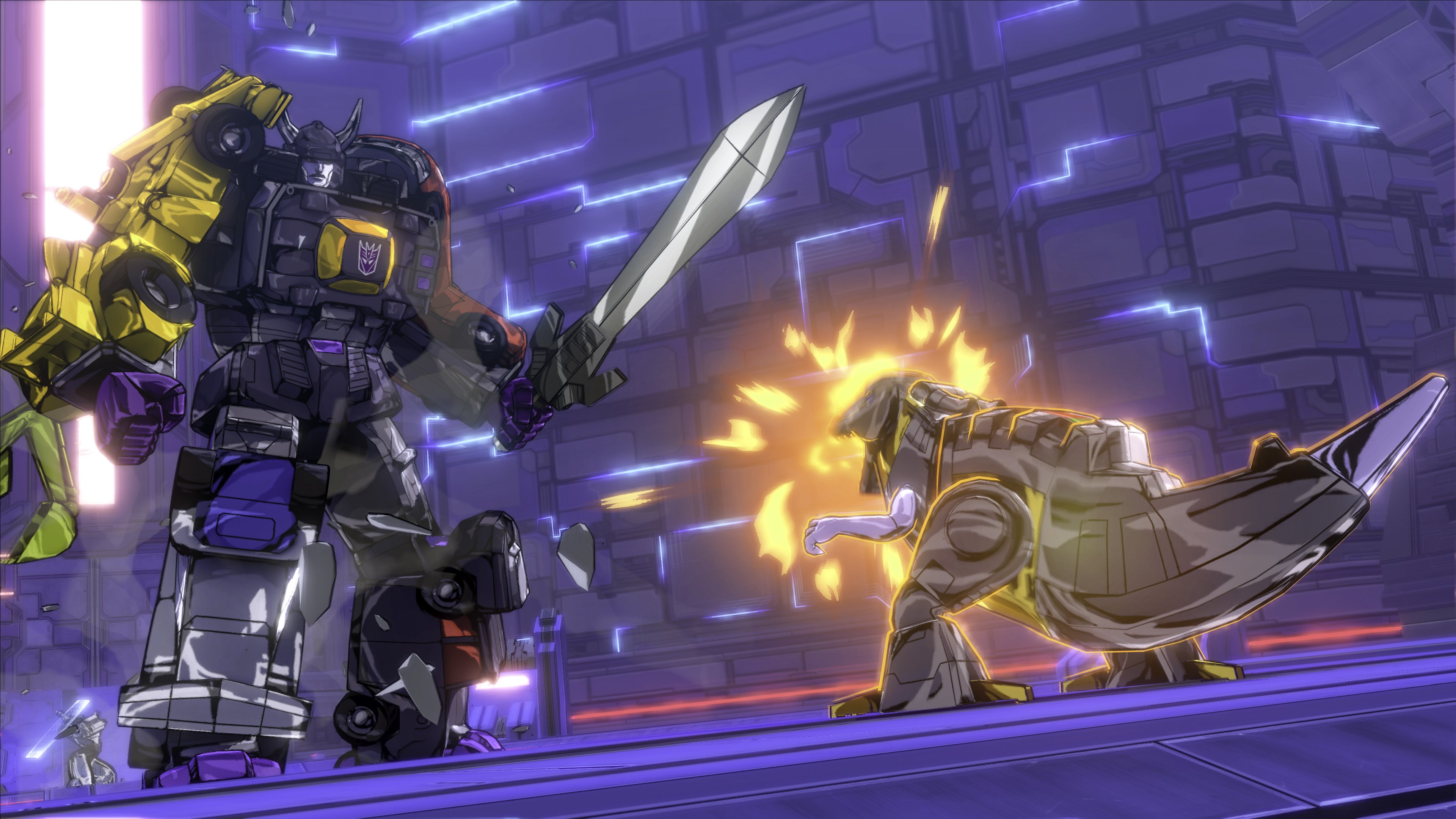 Transformers: Devastation is woefully short by any measure. The campaign can be completed in under six hours on medium difficulty. There are higher difficulty levels to unlock, and five playable characters who each have their own combat style, so there is some incentive to go through the campaign multiple times, but the gameplay gets so repetitive that only the most hardcore Transformers fans will likely be inclined to do so. There are also challenge levels to play through, but unlocking all of them requires multiple trips through the campaign, and they really aren’t all that different from the challenges you encounter in the story mode. The ability to synthesize new weapons theoretically adds a lot of replay value, but this system is so poorly explained and new weapons seem like such incremental upgrades, that there’s not much reason to keep playing for new weapons alone. There’s a solid game here, but it’s likely not one that you’ll play for more than a few weeks.

More Than Meets The Eye

Transformers: Devastation is the robot-filled Bayonetta game you never knew you wanted. The combat is sound and it's truer to the '80s Transformers cartoon than any other game that's come before, but a short campaign and repetitive gameplay hold it back from being the ultimate Transformers game. 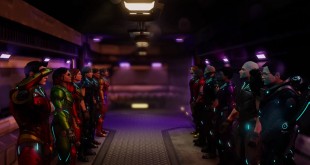